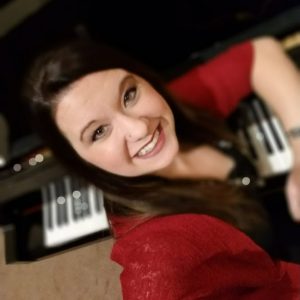 Angela Hjertstedt was born and raised in Portland, Oregon. In 1999, she holds an undergraduate degree in Vocal Performance and a Master’s degree in Education form Portland State University, having the honor of studying under Dr. Bruce Browne, Debbie Glaze, and Christine Meadows. Angela has held a variety of teaching positions, including at Centennial Middle School, where her ensemble was awarded third place in University of Portland’s Best of the Northwest festival, and she was nominated by her students and received a teacher award from a local radio station. She has also taught in musical programs at Rock Creek Middle School, where she helped grow the program to four choirs with 250 students. She is currently teaching part time at Happy Valley Middle School, where she has grown enrollment by 50% in the past year, and where her two sons will attend. Angela is an accomplished pianist, frequently hired to accompany choirs, soloists, and ensembles around Portland. She is also involved in church music ministry, and is often found at Cannon Beach Conference Center as a pianist and vocalist. Angela has taught private voice lessons for 20 years, and even with a small roster due to her day job, has students at the State Solo Championship nearly every year. Angela sang professionally for six years in “Choro in Scuola” under the direction of Dr. Bruce Browne, mentoring and inspiring high school choirs and their directors.

In the spring of 2022 Angela informed the PBC Board that she would resign from the position of Artistic Director at the end of the 2021-2022 season. The Choir is therefore recruiting for a new artistic director. Interested individuals are encouraged to apply today – more information is available online at https://portlandboychoir.org/job-opening-artistic-director.

Scott was born and raised in Portland, graduating from Roosevelt High School. He grew up singing at church, acting in local children’s theater productions, and playing several instruments at school – chiefly the clarinet. At Roosevelt, he was drum major of the marching band his senior year. He earned a bachelor’s degree in political science from Pacific Lutheran University and a masters in public policy from Oregon State University. Scott has worked in higher education administration and local government. He has served as city recorder of the suburban Portland city of Milwaukie since 2016. As recorder, he is the clerk of the City Council, the city elections officer, and records manager. Scott is an avid Dodgers baseball fan and lives in Milwaukie with his wife Sara and sons, Henry and Oliver – both are Portland Boy Choir members. The Stauffers have long believed music to be critical parts of everyday life and are very happy to be involved with PBC!

Andrea was born and raised in Kailua, Hawaii. She has a bachelor’s degree in Pharmacy from Oregon State University and is a licensed pharmacist in Oregon where she has lived for most of the last 30 years. She’s the mom of two children, one of whom sang in Portland Boy Choir for 10 years, and has served on the Board of Portland Boy Choir in various capacities since January 2012.

Music and the arts have always played a large role in her life. Andrea grew up singing in choirs and playing various instruments, eventually settling on the cello. She strongly believes in the value of music enrichment and the sense of community found within choirs. 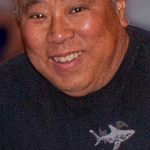 Rik is a freelance creative/production artist from Portland, Oregon. Prior to freelancing, Rik was president/creative director at Shiiki&Sichler for over twenty years. He was also an Advertising Representative for The Columbian newspaper in Vancouver, Washington.

Rik has been active with the American Advertising Federation (AAF) on the local, district, regional and national level for many years. He has served as chair of the Council of Governors and Western Region, as well as President and board member of the local organizations.

In June of 2012, AAF honored him with the prestigious Barton A. Cummings Gold Medal Award. The award recognizes distinguished individuals for their volunteer service to advertising through volunteer work with the AAF.

Rik sang in ensembles and choir in high school and played the lead role of Marryin’ Sam in Li’l Abner. He then took a hiatus from singing until a few years ago when he joined the Christmas Community Choir of the First Baptist Church in Gresham and then the Tilikum Choir Community until COVID silenced in-person choirs.

His passions include bowling, singing, plants and cooking. Rik enjoys reality tv, listening to follow-up podcasts and has recently gotten addicted to Netfix and its annoying “auto-play-the-next-episode” feature.

Melinda grew up in the Portland, OR area (Clackamas and Happy Valley). Growing up, she sang with several choirs through church and school and also with the Portland Symphonic Girlchoir. She continued these passions in college at Seattle Pacific University, where she got her bachelors of science in Psychology. She sang in the choir at SPU and performed in the college’s traveling worship band, playing and singing at churches and schools in the PNW.

A couple years after college, life brought her and her husband, Cole, back to the Portland area and they now reside in Happy Valley with their 3 sons. After being a stay at home Mom for several years, she has started working in the school district where her kids attend. She has served on her kids’ school PTA board as President, Treasurer and Membership chairs. She has also been a Grotto caroler since 2016. Melinda’s middle son, Carver, has an astounding ear for music and joined the Portland Boychoir since 2019. He has loved being a part of this amazing community and is very excited for where it will take him. Melinda has experienced first-hand the amazing and unique opportunities that being in a choir like this can provide, and is very passionate about providing those opportunities for Carver and fellow choir mates.

Her hobbies include: singing (harmonizing to be exact😁), piano, gardening, nature, camping, traveling, kayaking, and spending time with her family and 2 labradoodles

Board of Directors email: board@portlandboychoir.org

James is a native Oregonian who holds a Bachelor of Science in Business Management from Oregon State University. He gained a deep appreciation for music from his parents (Mom was an opera singer, Dad a classical music aficionado), and played clarinet and saxophones at McKay High School in Salem, and in All State ensembles. His son has sung in Portland Boychoir’s Intermediate and Advanced choirs, benefiting from the outstanding learning, social, and performance opportunities that the organization offers.

James has held a variety of leadership positions in information technology, e-commerce, digital marketing, and business operations in the technology industry. He is currently an IT director at Intel. He also served on the founding board of directors of Optimum Learning Environments (now Forest Ridge Elementary), a charter school established in partnership with Salem-Keizer School District.